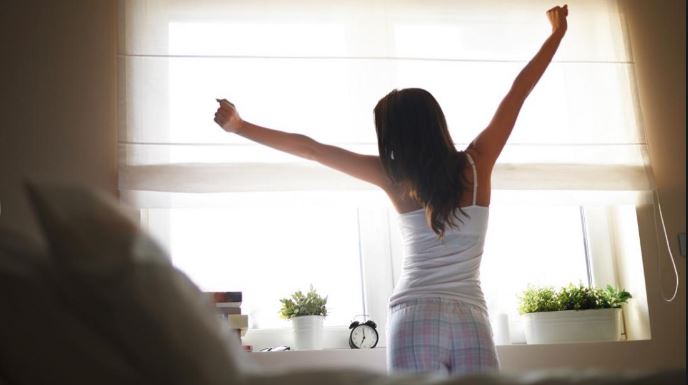 Any morning people here? My hand is up in the air. I am a huge morning person, not that this means I get excited when the alarm rings at 5 am. I still hate it, wish it would shut up and die and want to stay in bed forever; but I don’t. I jump up without a second thought. Second thoughts tend to result in me staying in bed longer than I should, and that’s not something I have time for. It’s not easy to be a morning person, but it’s really nice to be one. I’ve found that since becoming an adult that I prefer to go to bed earlier and wake up earlier. There is something so nice about waking up before the sun, watching the day begin and knowing that you have all day to be productive and worthy of your awesomeness.

It’s also been proven by scientific research that people who wake up earlier are happier, that they are less stressed and that they are more organized. I think that’s a fairly accurate assessment, and there is nothing wrong with it in the least. When you get up early and you begin the day accomplishing things bright and early, you feel pretty good about life. I know that for me waking up late means I feel rushed and out of sorts and more than just a little discombobulated. My entire day is off. If you are looking to become more of a morning person – and you really should as mornings are so lovely – we have some suggestions to make it easier for you. Basically, when you know what benefits you by waking up earlier, you will feel a bit better about it.

You’re more cheerful when you wake up early

Listen, I’m not telling you that you’re going to wake up just like Mary Poppins every morning, but I am telling you that you will feel more cheerful as the morning wears on. For me, the cheerful nature begins to kick in around 6:45 when I’m finished with my first cup of coffee, a good half hour of work and my hair and makeup. From there, my day just gets better. There’s nothing quite like the realization that you look good and feel good when half the world is still asleep.

When I get up in the morning, the first thing I do is see how much I can get accomplished before my kids wake up. A load of laundry? Challenge accepted. Dishes unloaded from the dishwasher from the night before? You’ve got it. I am more productive because I have far more energy in the early mornings, and there is certainly something to be said about that.

You’re more inclined to work out

Did you know that waking up early gives you more energy, which makes it more likely that you will find time to work out throughout the day? I like to think that this is because you have more time to do all the things that you have to do throughout the day, you feel more accomplished and productive, and you feel that you have time to work out. Also, knowing that you’re about to provide your body with more endorphins and feel-good stuff is a nice feeling in general. So, basically, you’re going to feel better, get more accomplished and look better doing it. What’s not to love?

Um, so this is a big one since we are here to help you save money and live better. When you wake up early, you have more energy and you tend to make better decisions. You’ve got some time to make yourself a healthy breakfast at home rather than feeling the overwhelming need to pick up something unhealthy in a bakery or drive thru. You can’t ignore the fact that waking up early and providing yourself actual time each morning and saving money is extraordinarily beneficial.

Perhaps you feel that this falls in line with the fact that you’re more cheerful, but we have more to add to it so it’s getting its own section. When you are happier, you make better decisions. When you make better decisions, you tend to be healthier. When you are healthier and happier together, you tend to be able to fight this little thing called depression. It can happen to anyone, and it is a silent disease. You’re far less like to become depressed when you rise early and make so many positive changes in your life. It’s time to set the alarm a bit earlier and start your day. It might not be easy right away, but it will get there before you realize it. Give yourself a month and you’ll become a morning person like you never thought you would.