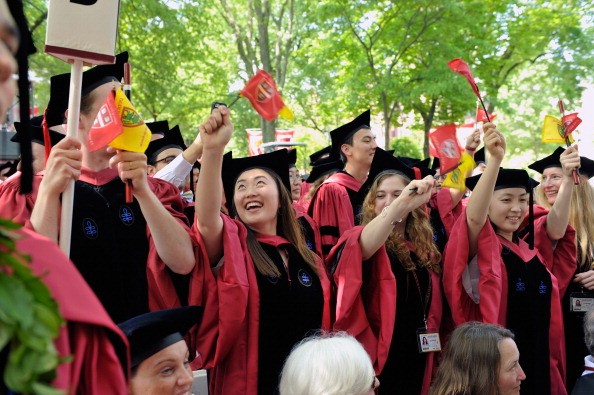 Yale, Princeton, Harvard; they’re all Ivy League schools. They’re some of the top schools in the nation – in the world, really. They’re the schools that produce the most millionaires and billionaires. They’re the institutions of higher learning in which old-money families expect their children will graduate with honors. They’re the first step to real-world success. An Ivy League education can, without question,  open up virtually any door if only you knock. High-paying jobs, corporate CEO positions, business owners, millionaires, musical prodigies; this is just a sample of what an Ivy League education buys for a student, and only the best of the best get into Ivy League colleges. Or do they? I once read an article written by a man who spent 24 years of his life in the Ivy League – college-educated and an eventual professor at Yale – who stated that his belief is that Ivy League schools are turning our youth into zombies, and after reading his breakdown, it occurred to me that perhaps the Ivy League really is overrated; and I have several valid reasons why this could be the truth.

We all know without doing any kind of research that tuition at an Ivy League institution is all but unaffordable to the general public. We’re talking hundreds of thousands of dollars spent on classes over the course of four years – more for many since a four year education is the unspoken equivalent of dropping out. Most students in Ivy League schools move on to prepare for their Masters – at least – or a Ph.D. of some sort, further raising the cost of a college education.

In a world in which we are not to be discriminated against, former Yale staffer William Deresiewicz (author of aforementioned article from which I based my opinions), insinuates differently. To summarize his words, you have to be either exceptional at every single thing in the world that you’ve ever tried – and you better have tried every single thing in the world – to be recognized as well-rounded, or virtually a prodigy in one particular subject at which you are so talented you can be considered pointy. Additionally, you have to be a good student with either excellent athletic ability, exceptional need, you must be a minority of some sort so that the school can meet requirements for that, or you must have very rich parents or parents who also attended the University of choice.

Deresiewicz says he and his committee once bypassed a student with perfect grades, perfect extracurricular activities (only five to six activities are considered too few) and nine recommendation letters from exceptional references because this person seemed too focused and uptight for the school.

To borrow information from Deresiewicz just one more time (I promise), he states he once received a letter from the girlfriend of a former student that said Ivy League education changed him. Instead of reading books as he once had to enjoy, he’d read the first few chapters and the last few chapters as well as all the reviews ever published. When asked about this, he informed her that it’s less important to actually read and enjoy the book than it is to simply discuss the book in a scholarly manner. This is frightening, is it not? It seems the Ivy League is teaching humankind not to actually be intelligent, but to fake intelligence.

The Aversion to Failure

Failure is paramount to success. You cannot succeed until you’ve failed multiple times, and we all know it. But the very strict admissions process and requirements for students looking to attend Ivy League schools are so tough that these kids begin to view failure as the end. Instead of hoping not to fail, experiencing disappointment and using failure to learn a valuable lesson in growth and understanding, these kids learn to view failure as the end of the world.

Listen, kids, failure isn’t anyone’s favorite, but it’s one step closer to success. And it also makes for a GREAT story to tell over drinks.

The Lack of Self-Esteem

Imagine being the smartest kid in your high school and always being looked up to as a genius. It makes you feel good and confident and amazing, right (not that I know, even though I did graduate with honors)? Now imagine attending school where everyone is a genius. How is that going to make you feel to be around only people just as smart or smarter than you? Chances are good that it’s not going to make you feel good about yourself. There’s nothing wrong with being intelligent, but you need some diversity to keep you feeling good. We all do.

A Profound Lack of Enjoyment

When your entire life’s focus is getting into a certain school and then graduating at the top of your class and then doing something that makes you wealthy and successful, where’s the enjoyment? You work your entire life for titles and for ‘prestige’ but enjoyment is noticeably absent. Friends, boyfriends, things that require you to have fun but take you away from studying or the 78 clubs and activities you have to join are not an option. Fun and enjoyment are fleeting moments.

A Lack of Experience

I’m a firm believer in the concept that people learn most effectively from experience. And I’m also a firm believer that the vast majority of what we will use to succeed in life comes from experience and things you learn living your life rather than sitting in a classroom (though there is no doubt education is a priority). That said, it does seem a bit questionable that someone who spends so much time working on getting into college or on class work does not have quite the time to experience life. And that’s a shame. Let me talk about it from a parenting prospective for a moment: As a parent hiring a babysitter to watch my four children, I’d rather hire someone without an education that has been around kids often than someone who has never experienced being around children but has read and studied the subject extensively. In this field of work, experience is key. Do you see where I’m going with this?

Wouldn’t you be anxious if your entire life has been focused on one thing and one thing only? School is important, but so is making friends and having fun and relaxing and enjoying the life you get to have only once before you grow up and have to ‘adult’.

The Professor Reward for Research

It’s not a well-kept secret that professors in Ivy League schools are lauded for their research, which means that they’d prefer to spend their time on their research than anything else – and that includes educating you or your children. So you’re paying for the most minimal education possible so that your children’s professors get to collect a handsome salary while working on their favorite research projects.

Believe it or not, there are many students and professors willing to admit that the coursework and curriculum in their classrooms at Ivy League schools are not challenging to most. The unwritten rule of an Ivy League professor is to cater to the students who are in their classrooms so that when they use that fancy and exceptionally expensive degree to land a major position out of college, they will then remember that their alma mater is the reason why, and they will send handsome donations to the school on a regular basis.