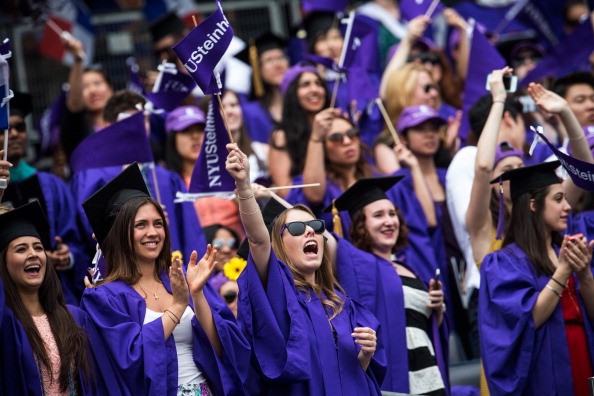 College is, and always will be, a good idea for most people. But let me start out by saying that college is not for everyone. There are plenty of people who will not attend college and will become very successful in their lives. There are plenty of people who will attend college and drop out of college to start a business and make more money than anyone else in the world (no, really; Bill Gates dropped out of an Ivy League school and has more money than anyone else in the world. I don’t make this stuff up.). There are people who will go to college, spend their parent’s money like it’s growing on trees and never do a thing with their life (because the government will pay for them to have kids and live and have cell phones and buy groceries and pay for their medical care, so it’s really just cheaper for them to stay home). There are people everywhere who will make money that you won’t even be able to imagine in your wildest dreams free of a college education. And there are those who will take their college educations and make so much money it’s not even funny. And then there are people like my husband’s best friend, who went to college, became a teacher and then decided he would be better off starting his own business with nothing to his name and now makes millions of dollars a year running his own business.

Now, before you all start saying things like, “Why did you have so many kids, and that’s not their fault,” hear me out. We only tried for three; that fourth was a twin bonus we weren’t planning for (but love unconditionally). And no, we aren’t living off the government or using any kind of assistance; we don’t need it. We’re good. We are just fine raising our kids, traveling, enjoying life and saving for college. But I have four kids and paying for all of them to get an education myself is going to be expensive. And I have three daughters whose weddings I probably have to pay for; and I’d like them to get married to some nice guys and have grandchildren I can spoil rotten. So there; I’d rather by useless gifts for little babies.

Paying for College will make them Appreciate Their Education

When someone gives you money and tells you to buy whatever you want, you buy whatever you want. When you have to work hard for that money and then you get to spend it, you’re more likely going to make a good decision about how to use it. That’s how I view college; if I’m paying for it, they’re not really appreciating it. Once they have to pay for books, they’ll probably use them more than if I’m paying for them and they get a better offer.

Seriously; there are so many scholarships available all over the world. My kids can apply for them, get them and go to school. They’re smart; they have good grades. They should remember that those good grades will help them earn money to go to school.

Student loans are not awesome, but they are there. And sometimes it’s the best way for kids to go to school and get that education. And it will teach my kids the value of money and how to use it wisely. I’d like them to avoid these, if possible, but they are there if they need them.

Oh, yes; that one. Not only is a job going to help these kids pay for school, it’s going to teach them some responsibility, give them some life experience and make them better people all around. It’s a good lesson for them that you have to work for things since they are not just handed to you for nothing.

My kids will learn to care for themselves by paying for college on their own. They will learn how to take care of themselves, how to manage their money and their finances and how to make it work. And one day, when they are raking in the big bucks and living a life that’s financially free, they will really appreciate that.

I Have Two that Want to be Doctors

There; that’s enough said, don’t you think? I have no idea what my twins want to be, as they are only 10 months old. However, my older girls both want to be doctors, and I’m not going to pay for medical school. I’m not even sure I know how much medical school runs, and I certainly don’t want to find out. I can’t afford to pay for my kids educations; this is probably what I do know.

My kids will be responsible. They will learn the art of being in charge of their own lives. This way, when they really grow up, they will already know what that means and what that’s like. It will make them better spouses, better people and better parents at some point in their lives. Did I mention they will really appreciate that education when they are paying for it?

Do you Know what You’re Paying For?

If my friends’ parents knew what they were paying for those first few years of college, they would have stopped paying. Not all of my friends, of course, but a handful. They spent two or three years doing nothing but taking as few classes as they possibly could, dropping as many as they were allowed, sleeping in, spending their parents money on spring break and booze and doing nothing to help them graduate. That’s what I’m not paying for. My kids don’t need $100,000 of my dollars to teach them to do a keg stand and how to function on 3 hours sleep in a week.

My Parents Didn’t Pay for Me

They didn’t. My parents contributed not a dime to my college education. I did it all on my own and I’m proud of that. It makes me appreciate my education and what I paid for. It made me work hard (hey, I didn’t spend all that time applying for scholarships and working to pay for classes so that I could goof off). It made me responsible. It made me finish a lot faster.