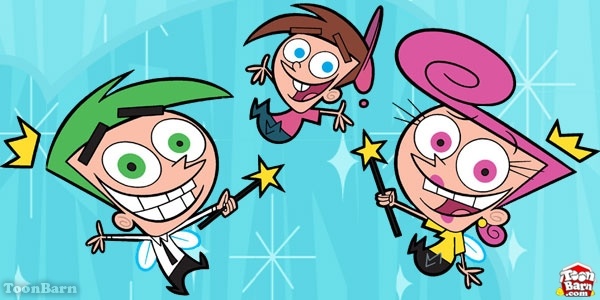 Timmy’s life is not a good one; his parents ignore him, his teachers take pleasure in failing him no matter what he does, and his babysitter is kind of mean and evil (Definitely mean and evil), and the Fairly OddParents is hilarious. Its debut in 1998 was good, and many of us watched the show without much thought. I was 15 at the time and my brother 12, which means that the spent a great deal of his time watching this particular show. It seemed childish and silly watching a show about fairy godparents in the form of a cartoon, but it became obvious very quickly that this show is far more intelligent and humorous than we imagined.

Growing up, turning into an adult and having kids of my own, this show is occasionally on in our house, which means we now get some of the jokes that we previously did not get when we were younger. The show is about a bunch of dimwitted people in a dim town with dim lives that cannot get themselves together, and Timmy is the victim of poor treatment. Enter his fairy godparents and his life begins to change. That’s when it becomes blatantly obvious that this show is a lot smarter than we like to give it credit for being. Just read on to find out 10 times that the Fairly OddParents was smarter than you realized.

When it taught you that the world is not fair

Hey, guess what? The world is not a fair place, and the Fairly OddParents makes sure to teach this lesson on a regular basis. Pretty much everyone in Timmy’s life treats him like dirt whether he deserves it or not, and it’s not fair. But, it’s the world and that’s kind of what you have to learn to expect as you get older.

When it taught you to be careful what you wish for

It didn’t take long for everyone watching the Fairly OddParents to realize that you have to be careful what you wish for. Wishing for things to be easier or wishing for more of something usually means that you lose things you already have and love as a result. Be careful what you wish for, because sometimes the answers to your prayers come in packages you don’t want or expect.

Timmy’s babysitter on the Fairly OddParents is actually the worst. No, she’s really, honestly, completely the worst. She makes Timmy take the blame for things that he didn’t do, she’s pretty mean to him and she’s not even remotely reliable or trustworthy. Parents; take note because this actually happens a lot.

The purpose of the Fairly OddParents is to provide Timmy with fairy godparents that are designed to remove the misery from Timmy’s life, but it doesn’t always work out for the best. For example, when his misery is gone and life is better for the young boy, he will lose his fairies. This means he either has to remain miserable forever so that he can keep what he has now or he has to change and move on to bigger and better things. It won’t be easy for him when his godfairies are taken from him, but it does mean that his life is no longer miserable.

When it taught you that bullying is real

Everyone bullies Timmy from his peers to his teachers to his babysitter. Fortunately, the Fairly OddParents has yet to touch on anything anymore involved than the bullying he endures in a humorous manner, but it’s real and it’s everywhere. What you see on this show is a kid with a sense of humor, but not all victims have a sense of humor when it comes to their bullies.

When it taught you that some things are just lies

There was once a scene with a lot of math in it – math is not my favorite – in an episode of the Fairly Oddparents. Essentially, the math problem is as follows: Sticks + Stones = Broken Bones and Words = psychological emotional and mental damage that sticks around forever. Bones heal, but words stick with you. Do that math problem, people.

When it taught you that no one really understands anyone else

The entire premise of Timmy’s life is that not one person he knows understands him. Not one person he knows gets what he’s going through, cares too much or even bothers to see why he does what he does or is who he is. Leave it to the Fairly OddParents to teach us that most people are too focused on their own lives to actually care that much about the lives of others.

Remember the episode in which the entire town of Dimsdale went completely black and white in an effort to eliminate things like racism and discrimination and all those other horrible things, thanks to the Fairly OddParents fairies? Remember when people then found a reason to make themselves ‘better’ than everyone else? The lesson here is a good one; it doesn’t matter what you do in life, people will always find a reason to hate others.

When it taught you that girls’ matter

That one time when Timmy turned into a girl on an episode of the Fairly Oddparents and his godfather fairy told him that no one cares what he thinks now that he’s a girl? Well, that was a pretty telling moment. It shows just how stupid that entire concept is in life, and just how much people have to let go of things like that to move on and change their way of thinking.

When Timmy’s dad tells him that his dreams were shattered when Timmy was born, it was hilarious. We all laughed. It was a great episode of the Fairly OddParents, and we all thought it was hilarious because, well, it’s the truth. We love our kids, but boy do our dreams go right out the window when they were born. I’m still not the mother I thought I’d be before I had kids.