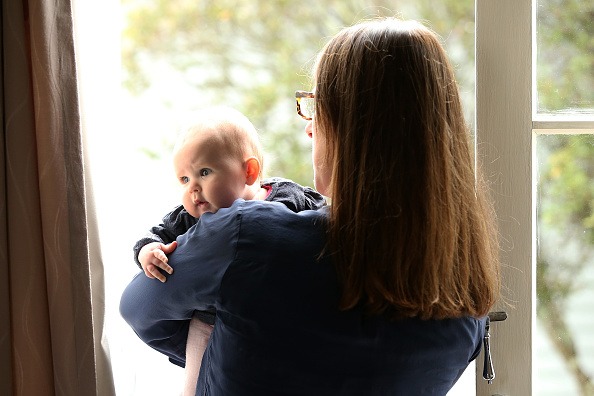 I fall somewhere in between those two women. Every time we made the decision to get pregnant, it happened for me on the first try so I was never really obsessive about it. But the second the decision was made I was counting down the days until I ovulated, the day I could first test, the roundabout time we’d find out what we were having, my due date; I was obsessed. I never bought an ovulation kit, and that is the only reason I did not fall into the ‘obsessive’ category 100%. Only like 75%. Everything was baby related every single time. Was that implantation bleeding? Did my 12-year-old boy breasts look a little bit less young male child and more preteen girl beginning the glorious phase of puberty? Does that smell bother me because it’s gross or because I’m totally knocked up and sensitive to smell? Do I really want a Publix sub because I’ve always loved them my entire life or because now I’m craving them?

That’s the feeling everyone trying to get pregnant feels. We all know when we’re supposed to ovulate and that we can take a test up to six days prior to our missed period – even though it’s not always accurate that early. Am I pregnant? It eats at you, you obsess over it, you dream about it, you count down the days incessantly until you can test. And you look for signs. Some are obvious, and some are signs you might not even be aware you might have during early pregnancy, but I have learned so much after three pregnancies that I can tell you off the top of my head what you should begin looking for around 3 weeks after the first day of your last period (just a few days before you can test).  Here are some true early signs of pregnancy.

When you are TTC, you will note that you ovulate on a certain day and have anywhere from 12 to 24 hours to make things happen while your eggs are still alive and kicking. From that point, a fertilized egg will begin a journey that could take up to a week through your fallopian tubes and into your uterus where it will then attach itself to the uterine wall and begin the long and arduous process of becoming a baby. When the attachment happens, some women notice that a little bit of dark brown blood appears. This should happen long before your period is due, and you’ll notice it because it’s out of the ordinary. This is called implantation bleeding, and it’s one of the most telltale signs of pregnancy – though not all women will notice it.

If you usually sleep on your stomach and you have no issues and you suddenly notice you can’t do it without pain, you might be pregnant. When your girls are hurting on the regular, it could indicate you’re pregnant. Of course, you might also experience this as your period arrives, too.

Since I have no pre-menstrual signs (ever, my entire life) this was a big one for me with each of my pregnancies. They seemed a bit larger and my bra a bit tighter. And trust me, with my lack of girls, this was noticeable to everyone in my life.

I spent a month looking for Valentino’s Rock and Rose back in the fall of 2007 and it was sold out everywhere. I finally found it when I accompanied my husband on a business trip to Cleveland, where we were, coincidentally, trying to get pregnant. A week later, 4 days before I was able to test, I got into my car wearing my new perfume (as I had been for over a week at that point) and nearly died from gagging. The smell overwhelmed me trapped in my little sports car. I was dying; and I knew I was pregnant.

There is never a time in my life when I do not want a drink. I might turn them down simply because I know when it’s time to be responsible and when I need my wits about me, but I always want one. When I’m pregnant and before I can test, however, my body screams, “PUT DOWN THE WINE, LUSH,” and I no longer want it. I know I’m pregnant when my body shuts down a drink. Incidentally, so does everyone around me.

Cravings for Something Very Specific

When I’m newly pregnant, I begin craving a Publix sub like no one’s business. I’ve loved them my entire life and have them probably 4-5 times a week regardless, but I become obsessed. I wake up and start my venture to the store for a sub, even if it’s 8 am.

Many women experience this. I only experienced this with my twins, and never with my two older girls. But it was hardcore and it was about a second after the eggs found their way into my uterus. I assumed it was because I was having a boy this time around since I’d had two girls and never felt sick. Little did I know it was because there were two babies in there.

We’re all hormonal and emotional on any given day, but when typical mild annoyance becomes, “I will kill you in your sleep if you don’t shut up the snoring you big stupid jerk!” in harsh, angry tones and then turns into, “I just don’t know why you have to snore, it is so sad and makes me so emotional,” in a pathetic crying tone to, “I’m so glad you’re here with me at night because I love you so much husband dear,” in awestruck wonder that this wonderful man who you just threatened to suffocate with your bare hands is yours, you might be pregnant. Just a thought. If you think you’re going completely crazy, you are; but it’s because you are pregnant.

The Obsessive Need to Nap (like all the time)

This was another huge tell for me. I need, I mean need, at least 9 hours sleep each and every night to function at all the following day. I’ve been like this my entire life (which is why God blessed me with four kids who miraculously slept through the night within two or three weeks of birth) and I’m still this way. It’s 7 pm on a Friday night? Excellent; it’s bed time. So when I need to take a nap by 11 am even though I slept 12 hours the night before, I know I’m eating for two.

Sometimes you just know. I always just knew. There was never a doubt in my mind that I was pregnant any of those times. Ever. I just knew; each and every time. I could feel it in my bones that there was a baby inside me, and I’d tell my husband with complete assurance that I was pregnant. I was always correct.

So tell us what you think.  Are we missing any early signs of pregnancy?  How do you go about knowing if you are going to have a baby early on?