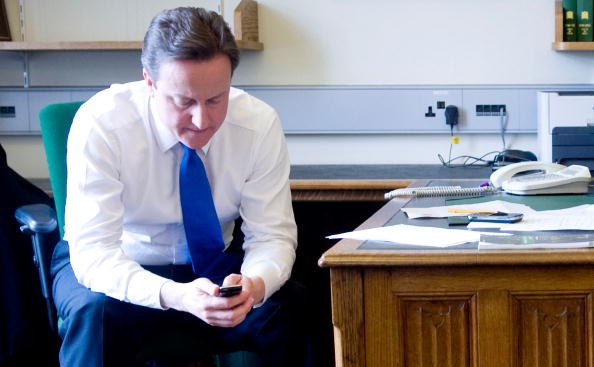 Before text messages were possible, we had to –  gulp – talk on the phone. It was a horrible, awful time in the lives of so many. Some of us grew up during a time in which we did not even have cell phones. That meant we had to take this thing that was attached to a wall and drag it into the hall or as far into other rooms as possible – and it wasn’t possible since there was this curly thing attached to it called a cord. It was the only way to get a little bit of privacy on the phone. It was big and you didn’t know who was calling – caller ID wasn’t quite popular yet – and it was awful. That was my childhood. Cell phones have changed everything; for the better. I no longer have to talk to people. I can text them. Given my insane dislike of phone conversations (am I the only one who finds them awkward with the pauses and stuff?), texting is a way of life for me. It’s how I communicate with people. When my phone rings, I’m not sure what’s happening.

Don’t get me wrong, however, there is plenty wrong with the average text message. In fact, there is so much potential for disaster with text that it’s just not even funny. Texts can be great; quick and fast and to the point. But they can also be so terrible and so disastrous that we cannot recover from them. Much like the spoken word, texts cannot be taken back. In fact, they can be kept forever so that people remember exactly what it is you said without making any mistakes. Sometimes text messages can be a failure. And we have 15 texts right here that no one – NO ONE – should ever, EVER, send – ever.

Never ever send a third response to someone who doesn’t reply. If you’re texting someone and they don’t reply the first time, it’s safe to assume they either forgot to respond in the moment that their kids decided to all use the potty in their pants at the same time or they just didn’t hear their phone. If they still do not respond after the second text, never text them again.

Send me a picture

Um, no. No one needs a text asking them to send you a photo. It’s creepy and gross and just out of the question.

Um..hey. I have a job and stuff, so please leave me alone unless you have something important to say.

Never, ever send someone a nude photo of yourself. Don’t send anything like that ever, ever, ever. It’s not something they’re getting rid of, just so you know.

You’re drunk – go home. Never send a drunk text to someone you aren’t talking to or haven’t seen in a while or that you broke up with. It’s a bad idea. You don’t miss that person. You don’t.

Texts to Your Parents when You’ve been Drinking

Listen, your mom does not need you to text her in the middle of a bachelorette party in Vegas. For one, she’s just going to worry. Secondly, it’s probably not going to be appropriate in the first place.

If you’re going to break up with someone, do it in person. Have the courtesy to be kind and brave about it, and not to be a jerk.

Do not ever send a text message saying something negative about someone to anyone, ever. It’s probably going to get back to that person, and you’re not going to be able to deny it if you feel the need (like that one time you called your boss a jerk and now he knows and he’s seen proof and denying it won’t matter).

No one can read this. It’s not just slang. It took me twice as long to type that as it would for me to have typed the full sentence, and that’s just annoying.

Um, this is the kind of announcement that deserves its own special real life moment. Try not to tell your spouse, family or friends that you’re knocked up via text message.

Whether it’s a relationship or a job, you should have the courtesy to tell someone in person that you’re not going to continue doing whatever it is you are doing. Sure, it’s easier via text message, but it’s not all that nice or kind.

Any Kind of Fight

We get that people become angry and want to send text messages that engage a fight, but don’t. One of the worst things you can do in life is fight with someone via text. Just wait until your husband gets home to confront him about that cashmere sweater you asked him twice not to put in the dryer. It’s more effective to be in person when you’re having this argument, anyway.

If someone needs your social security number or your address or your middle name or something else that’s very personal – like your credit card information – do not send it to them via text message. This is so easily stolen and used for inappropriate purposes. Either make the phone call or do it in person. Trust us; it’s so much better for you to keep this information as private as possible.

Please don’t ever share bad news with people via text. The death of a loved one or the diagnosis that came from the doctor should be respected and shared in person. If you feel that someone is not important enough to share information like this in person, they’re not important enough to share it with via text in the first place. If someone is far away and you’re unable to tell them in person, please just pick up the phone and call.