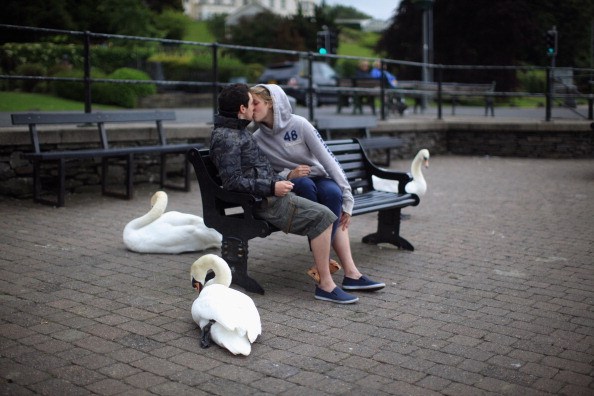 Parents know what it’s like to hear the ridiculous questions and statements from their friends and family members regarding their reproductive systems and personal decisions. They ask when you’re going to try for baby number 2 30 seconds after baby number 1 enters the world. They ask if you’re going to breast feed. They ask if you’re having reproductive issues. They ask all kinds of questions that are none of their business and they make comments that are downright rude. Well, parents, the same thing happens to couples without children, too. And some of us are guilty of asking these questions and making these statements. Having a baby changes you and your entire life, but it doesn’t give us or anyone else the right to make rude, hurtful and nosy comments and questions to our childless friends. So before you go asking that childless couple why they’re not getting busy making a baby, go ahead and read over this list to see if your silly comment or question is on it. If it is, go ahead and assume you shouldn’t say a word.

When are you Having a Baby?

It’s a natural question that many people want to ask because they are curious and because it seems like good small talk. But it’s nosy and intrusive and very personal. You might as well ask them when they’re planning on having sex or if she’s ovulating. It’s really none of your business, and not all couples are willing to discuss such private issues with you. Additionally, it might bring up painful issues for them, such as infertility they’re secretly struggling with or financial issues that are preventing them from having kids.

Why Aren’t you Pregnant Yet?

Why are you nosy and rude? It’s an honest question, but that doesn’t make it polite. Some people aren’t interested in being parents right this very second, or next year, or ever. So asking someone why she’s not pregnant yet is a bit on the classless side. You might as well just ask her whether or not she’s suffering from issues getting pregnant or if she’s just choosing to remain childless.

I Bet your Parents are So Impatient

They might very well be very impatient to have a grandchild, but you shouldn’t be so presumptuous. Again, like many of the questions on this list, you might not know the full story as to why a couple isn’t jumping on the baby bandwagon. They might be in a bad place in their marriage, they might have been through three miscarriages this year; they might be just as impatient.

You’re Going to be a Great Mom; There’s Nothing to be Afraid Of

Why is it that so many of us assume women (or men) who are not yet parents are afraid of something? Were you afraid of being a parent before it happened for you? I wasn’t. I figured that women do it all the time and that I’d get it together. And I did; and I never once felt the need to tell other parents or non-parents that they shouldn’t be afraid. Though I have told them to get the epidural – that’s good stuff.

You’ll Understand When you have Kids of your Own

The Clock is Ticking

This one; it’s just downright inappropriate. Why not just look at a woman and say, “You’re old, honey, you might want to get busy now before those eggs of your shrivel up and die,” instead of sugarcoating it like this. It’s not polite; don’t say it.

You’re not Getting any Younger

Please reference the above statement. Why must you point out the age of a woman? It’s not polite. Women are having babies older and older these days, so don’t assume that just because she’s 30 and not yet a mom means she’s running out of time.

This is Great Birth Control for You

Your kids might be great birth control for non-parents, but they also might make your childless friends ache on the inside with want and desire. You just don’t know unless they open up to you. If they say they don’t want kids, then it’s probably safe to assume they don’t. But if they just nod and laugh a little, you might have crossed over a painful line.

You’re So Lucky You can do Whatever You Want

Those who do not want kids do feel lucky that they can do whatever they want, but that doesn’t mean that they want to hear you complain about your own choices. Sure, the grass might be greener at 2 am when you’re up cleaning up a potty accident, but your friends don’t like hearing that you think they are lucky for not having kids – even if they don’t want them. And some women are struggling to have kids and can’t, and hearing you say things like this can tear them apart on the inside. Just be mindful that sometimes people don’t want the same things as you, and sometimes they want them so much it hurts.

You Don’t want a Family?

Here is something to be said about this question; what makes you so presumptuous as to assume that a childless couple needs a child to be a family? The two of them are a family; they do not need a child to make them into a family. Childless couples hate hearing this. If they’ve chosen not to have kids yet or ever, hearing this makes them feel as if you don’t consider them a family. If they don’t have kids because of circumstances out of their control, this question is hurtful in a completely different manner.